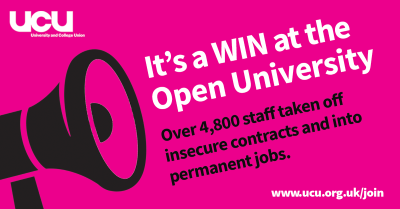 It seems slightly unreal that the new AL contract has come into force now because there were a lot of moments when I didn’t think it would ever happen. UCU first started negotiations on a new contract back in 2008. At that stage the University was negotiating with us on a form of variable hours contract, but as the new economics of HE took shape in 2011 management was increasingly reluctant to guarantee minimum workloads and salaries for ALs and became slightly fixated on the notion of replacing the current profile of the workforce so that remaining ALs worked on larger contracts. In January 2012 the management side said they no longer considered it possible to proceed with the negotiations, and that acceptable ways of reducing the size of the AL workforce, such as natural wastage or a severance package, were now considered too slow or too expensive.  At the time the negotiations were headed up by Fraser Woodburn and I remember the day when he called me and the then President Roger Walters into his office to tell me that they had done the calculations and if the contract went ahead it would mean losing around 3,000 staff so that they could have fewer ALs on bigger contracts. There was no way that UCU could agree to anything like that and despite calling in ACAS a few months later ultimately the talks collapsed.

We thought that was going to be it, but then Fraser thought again and we were called into another meeting just before Christmas and told that the University had rethought its position and they wanted to reopen negotiations with a view to negotiating a new contract within a year. It actually took five years to negotiate the terms of the new contract along with an outline of how it would operate and several Vice Chancellors and University Secretaries later saw the ballot on the new contract being passed overwhelmingly by our AL members on the agreement reached in 2018.

At that stage one would have hoped that things would be smooth sailing to the point of implementation but it has taken us over four years of intense and continuous negotiations to get to where we are now. One of the key problems has been the huge complexity of the current system with numerous contract types and employment practices, and don’t get me started on the way that payments are structured! We have reviewed, amended, and created over 200 policies to make this contract work and there is still work to be done, in fact we were negotiating on Monday afternoon to resolve one policy that needed to be in place that day. Things have really gone to the wire on this contract at every stage.

A key piece of work is going to be the culture change to integrate ALs into faculties and to move away from the idea that ALs are only appointed to specific modules. That system of module appointment doesn’t happen for teaching staff in any other UK University and it simply acts as a barrier to workforce planning and stable employment

An important factor of the move from negotiating the contract to negotiating the implementation has been the creation of a Staff Tutor/Student Experience Manager (SEM) negotiating team. UCU has an extraordinarily strong team of ST/SEM negotiators who have been working hard to ensure that the ST/SEM voice is heard because whilst we know that their job description is not changing, the ways of working are definitely not going to be the same. Our priority has been to raise the issue of ST/SEM workload and to protect the academic part of the role. We haven’t always been as successful as we might have hoped but please believe me when I say that the UCU side has worked tirelessly to represent your views and those discussions are ongoing. We hope to have more news on that in the near future.

Your local AL negotiators and representatives have been magnificent and without them none of this would have happened, but we have also relied on the fact that when it was needed the membership stood up to be counted and management always knew that we had a force behind us that they had to deal with when things went wrong. It is inevitable that things will go wrong this year but we will work with the University to try to fix anything that occurs as quickly as possible. We know there is serious work still to be done in implementing workload management systems and getting the skills audit done.

So, we are a bit tired and a bit battered and things are definitely not perfect, but what has been achieved with the new AL contract is remarkable. We have reduced casualisation in UK higher education teaching staff by 15% and finally we have a workforce that has parity of treatment and respect, with ALs reporting that this is the first time in their entire career that they have felt any degree of security. Credit also has to go to the University management that had the vision and confidence to make a change that other institutions have run away from, as well as a team of staff that have worked phenomenally hard to make the contract a reality.

For all of the problems though looking back on ten years of hard work I can say with confidence that it was worth it and UCU members should be proud that they are leading the way in the sector.