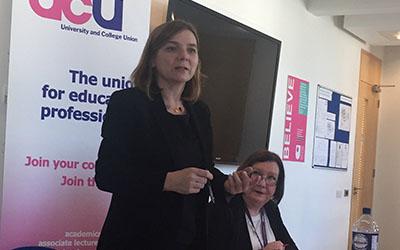 Sally Hunt was the speaker at an OU branch of UCU Open meeting on 15th March 2017 in the OU Library.  She was recently re-elected as the General Secretary of the University and College Union (UCU), view press release.

You can view a recording of the meeting on the OU Stadium website.

Sally paid tribute to Pauline Collins, our Branch President – she described Pauline as very modest and said that she is highly respected within UCU. Sally wanted her thanks to go on record for all the work Pauline puts in to being our President, especially in such challenging times – thank you Pauline!

Sally spoke about the following things: