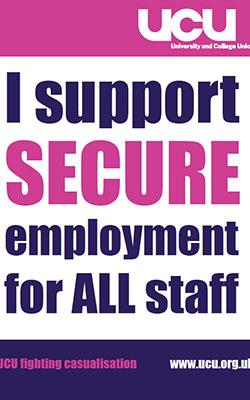 We asked our members for comments about what it’s like to be on a fixed-term or associate lecturer contract. We received eloquent testimony about the impact on individuals and on the work staff are able to do. Here is a selection of the replies we received and thank you to all the members who sent us their comments.

“I would be so happy if we were given permanent contracts so that we can concentrate on our work and continue to put our students first.”

“Recently I was refused a bank loan and I know I would struggle to get a mortgage on my own, because my contracts are complicated and my salary varies month to month.”

“Because I am on fixed term contract I am unable to move my mortgage to a lower rate of interest deal to take advantage of the reduced interest rates currently available, so I am stuck on a mortgage which has a high interest rate.”

“The longer a researcher stays at the OU the more their future is tied up with it – they’ve developed intricate knowledge of the OU, they put all their effort into making a project successful, their friends and support network is there.  However, on the OU’s part there is no commitment. There is no reward for loyalty to the OU, in fact loyalty to the project can be punished because extra time spent making the project a success means less or no time for searching for a follow on position.”

“I feel embarrassed to campaign about my working conditions, as I fear showing the students how poor my situation is and ending up being accused of bringing the university into bad repute.”

“Research contracts only pay for the RA to work on them. Other activities need to come out of their non-paid time.  The RA has a continuing dilemma on where to spend their limited time: furthering the research, furthering their career, looking for job.”

“One thing that I think isn't always recognised, is that casualisation can lead to taking on too much extra work, out of anxiety that the current work could disappear within a few months.”

“In a difficult relationship, I was frightened to leave because my variable income would so badly affect our daughter”

“Another OU specific is the necessity to re-apply for one's job and without guarantee that one will be appointed to the new revised module. It is time consuming and it involves gearing oneself to interviews on material you have taught successfully before. It is in short, humiliating.”

“One of the colleagues who I team taught with recently was made redundant. Terrible for morale. Terrible for any sense of loyalty to the institution. Really clarifies in stark terms that we are lowly disposable components in the HE machine.”

“I live in permanent fear about future employment at the OU. To add to this, soon after term ends we receive e-mails regarding potential tutorials in the coming year to modules we may or may not be teaching. I end up spending many hours trying to put together a timetable for a scenario I know is entirely fictional. Over the summer this is repeated many times and is followed by threats of redundancies and yet more fictional timetables.”