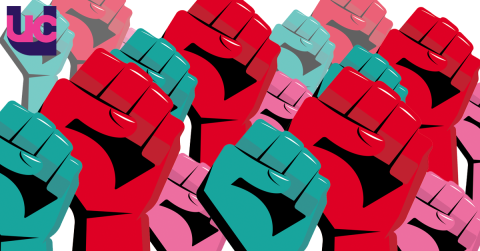 Collective action is effective action.  As Academic-related staff we may not always feel that our individual action makes much difference, but together, our action accumulates across our organisation and the sector and has an effect. Our collective action in 2018 staved off changes to pensions and working collectively resulted in new contracts for Associate Lecturer members. The cumulative effects of unattended conferences, and associated costs, reduced service levels for students, undelivered post, unanswered emails, rearranged meetings etc. combined with the effects of striking by academic colleagues, are crucial in forcing the hands of employers. Employers have indicated time and time again that they are not willing to resolve disputes unless they absolutely have to. As we face huge costs-of-living rises, and the prospect of a miserable retirement, we cannot and should not accept this dereliction of duty of care.

We are clear at this point that our employers can resolve the issues we are striking over but are choosing not to. As one of the biggest universities, the OU has the clout with other employers to make a difference.  A large and visible strike involving both Academic and Academic-related staff is essential to show the sector’s leaders that we deserve better than they are willing to offer.

As we prepare to join universities up and down the country for strike action between the 14th February and 2nd March to defend cuts to pensions and the ‘Four Fights’ on pay, equality, workload and casualisation, the importance of standing together has never been clearer. The more people that strike, the more likely it is that we will succeed in our aim of making the higher education sector a fairer and more functional place to work and study.

Striking can be hard and expensive, but it can also be an uplifting and positive experience. In December, the OU branch organised in-person pickets at Milton Keynes, Manchester, Nottingham and Edinburgh. Many colleagues joined pickets at other universities, and we held online rallies and meetings to enable members to come together virtually. Members, some of whom were joining picket lines for the first time, met new colleagues and made connections across the University. We also remind colleagues that financial support is available to those who most need it through the OUBUCU Hardship Fund to help members take action.

For many members, taking part in strike action and connecting with colleagues can be a reminder of why they work in education. This blog details one such experience.

We act collectively, but we benefit as individuals.

What’s in it for me?

We all stand to gain from successful strike action, academic-related staff as well as academic staff. At the time of writing this item in January 2022 inflation stands at 5.4%. A 1.5% pay rise is effectively a pay cut, compounded by below-inflation pay settlements since 2009 which have not kept pace with rises in the cost-of-living. The Retail Price Index is currently 7.5% meaning that the cost of goods and services is rising. In the Spring we face increases in the cost of National Insurance, pension contributions and energy costs which will compound the rising costs of food and other services. Pay has decreased by 17.5% (more for many) against inflation since 2009. The UCU - HE pay modeller tells you what you should be earning if your pay had kept pace with RPI. Imagine what life would be like if your pay was fair. As living costs continue to rise, our pay stagnates. Our employers do not seem to think this is important. We must show them that it is.

We work in a sector that has high gender and race pay gaps, where workloads are often untenable and where casual contracts proliferate. The OU has made incredible gains on casualisation in recent years, showing that persistence is the key. We must now persist, as a united sector, to improve the picture for all staff in Higher Education.

Changes to our USS pension scheme were prevented by strike action in 2018. The pension scheme is healthy and has more than recovered any ‘deficit’ since the contested and misleading valuation in March 2020.  With inflation now at 5.4%, the proposed inflation cap of 2.5% will see further erosion of the value of pension benefits, beyond the absolute reduction in benefits. Members have estimated that they would have to take strike action for 6 years to lose the same amount of money that we will lose from our pensions if the proposed changes take place. You can see the effect of the changes on your own pension using the UCU pension modeller.

Recently, UCU made a compromise proposal which would see our contributions (and that of our employers) rise slightly in the short term, whilst we wait for an evidence-based 2023 valuation. Within minutes of this being released, UUK (presumably without consulting its members) had rejected that proposal. This is despite the fact it was in line with the results of the recent USS consultation. We must make a strong stand against UUK operating in this way, and show our employers that we will not be treated with such contempt.

OUBUCU, other UCU branches and UCU HQ have planned exciting activities, both in person and online to take place across our 2 weeks of action. Further details of these will be shared in the coming days on the OUBUCU website. In the meantime, please plan to join colleagues across the UK between 14th and 2nd March in support of our fights to protect our pensions, end job insecurity, tackle the issue of rising workload and address pay inequality.